Thule has been designing joggers for quite some time now, and to be completely honest, every model it comes out with is better than its predecessor. The Thule Urban Glide 2 is a force to reckon with in the world of joggers as it brings everything that a parent might need into their hands.

The Thule Urban Glide 2 is a substantial jogger without the over-complication that other manufacturers resort to seem sophisticated. It comes with pneumatic wheels, an integrated suspension system, an enormous, sturdy canopy, and plenty of storage.

Most jogging strollers require both strength and pliability. That is in order to carry themselves firmly through different routes while maintaining the safety and security of the child inside.

As a result, aluminum is the best choice for their frames, as it affords the perfect mix between durability and flexibility. Plus, it works well with the suspension system integrated in the stroller to absorb any pumps the jogger might encounter throughout the day.

Thankfully the Thule Urban Glide 2 has a healthy amount of storage, which is all accessible to both parent and child.

Primarily, we’ve the drop-basket, which can carry moderate-large-sized diaper bags, along with other essentials, adding up to 10 lbs. The thing about this basket is that it’s protected by waterproof mesh coverage.

Consequently, if it rains, if there is mud, or even your little one has spilled something, your stored items are safe. You can also access it when it’s covered through a zipper in the back.

Nonetheless, storage doesn’t stop there. There are also mesh side pockets for things that you might not reach for as frequently, in addition to inside pockets on both sides of the seat to store your child’s snacks.

The brake system on the Thule Urban Glide 2 is somewhat revolutionary. But, first, we’ve the standard brake pedal in the middle between the two rear wheels, and it’s easy to operate as long as you’re wearing proper footwear; sandals and flip-flops won’t do, and it might hurt the parents’ feet.

The impressive bit is that you’ve another brake system at the tips of your fingers to aid with the control of the Thule Urban Glide 2 . It’s a twist decelerator that helps you control the speed of the jogger at all times.

Subsequently, before you press the brakes to stop the stroller immediately, use the decelerator to slow down and get the stroller under control.

Parents are also provided with a wrist strap to keep a solid connection with the jogger at all times, just in case they lose focus for a minute or two.

Since the wheels here are designed to withstand the most strenuous routes, they’ve to be pneumatic so they can give and take with such environments.

We’ve the front swivel wheel, which can be locked or unlocked according to where you’re at the moment. That is in addition to the two rear wheels, which are a bit larger, making it a bit tricky to learn maneuvering them around tables, lamp posts, and door frames.

Yet, with practice, everything becomes much easier. Moreover, the rear wheels are entirely removable using a simple knob at the center of their frames for space-wise storage.

The Thule Urban Glide 2 naturally comes with a toddler seat, which can recline almost all the way to allow comfortable napping. Nevertheless, it’s not suitable for newborns or any child that can’t support their neck and head yet.

For that, you’ll have to purchase the bassinet and replace the toddler seat with it. Anyway, the seat is a sling-style one, and it’s heavily padded with a width of 13.5 in, which is perfectly enough for a child up until they are around four years old.

Furthermore, the decline of the seat can be adjusted single-handedly; but, to return it to what it already was, you’ll have to use both hands.

As for the harness, it’s a five-point harness, which goes over the shoulders, waist, and crotch. Plus, the shoulders and the waist are adjusted together with one click to equalize pressure all over the body and make sure that your little one is snug.

The canopy of the Thule Urban Glide 2 is strong and durable as it’s made with UP+50 fabric that protects from the harmful effects of ultraviolet rays. Moreover, it has two mesh pockets on the sides for extra ventilation and a zipper peek-a-boo window at the top.

This zipper allows parents continuous vigil on their little ones and gives room for conversation if your child is old enough for it.

Plus, if your child decides that they’re not up for conversation and they wish to sleep, you can safely check on them without disturbing them, as the canopy has a magnetic mechanism for opening and closing.

The handlebar is designed to offer maximum comfort for parents at all times. It’s completely covered with a dense layer of foam that is only cut by the twist-decelerator.

Furthermore, it has five different height adjustment settings so that you’re neither slouching nor struggling in any way with controlling the jogger.

The Thule Urban Glide 2 weighs 24.4 lbs, which isn’t the lightest for joggers. However, don’t forget that it’s a heavy-duty stroller fit for all parts of your day, not just jogging. It’s a lot of storage and many mechanisms within its design, so, after all, such a weight is reasonable.

What’s great about the Thule Urban Glide 2 is that its weight doesn’t make the setup process complicated. It takes around five minutes, as it comes already assembled except for the wheels, which you’ve to simply click on each side.

This is undoubtedly a feature that isn’t talked about enough. The Thule Urban Glide 2 is adorned with light reflective straps on the edge of the canopy and rims of the wheels. This means that the parent(s) and the child will be seen if they’re jogging anywhere with minimal light.

We’ll end with accessories, as parents tend to mix and match to find what would make their experience more pleasurable. There are two main accessories that are somehow essential: the bassinet and the travel system adapter.

We’ve mentioned the bassinet before, and it’s essential for you to replace the toddler chair with the bassinet if you wish to use the stroller for your newborn. The bassinet is flat, and it snuggly holds your little one as you move around.

The Thule Urban Glide 2 can be used as a travel system as it’s compatible with countless car seats. Nonetheless, you must remember to purchase the correct adapter and connect it between the car seat and the toddler seat to have the proper alignment.

In the end, the Thule Urban Glide 2 is a tenacious stroller that can do it all. It might be a bit cumbersome and require some training to get the hang of; yet, it remains a worthy investment. After all, it can support your child for up to four years of age. 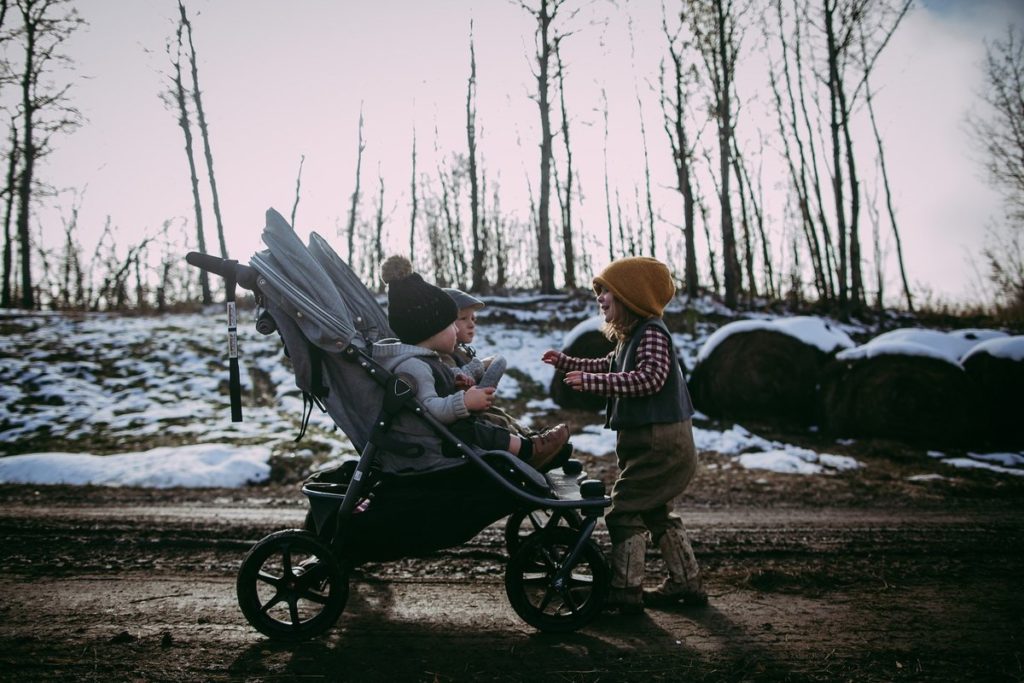 AllMomNeeds.com is reader-supported. When you buy through links on our site, we may earn an affiliate commission. Learn more
Scroll to Top